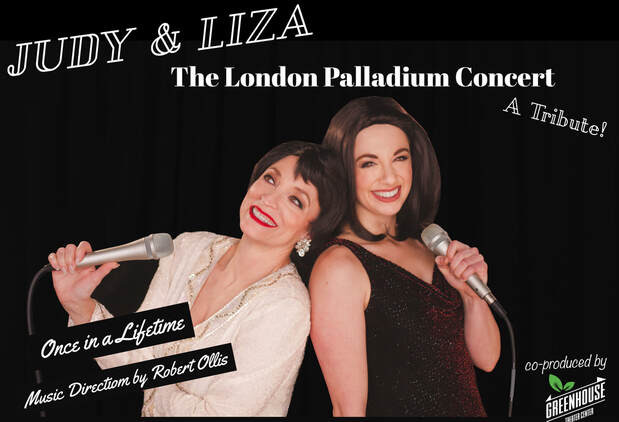 JUDY & LIZA: ONCE IN a LIFETI<ME
The London Palladium Concert
A Tribute!

SPECIAL THANKS to William & Wendy Spatz and James Heppler for making this possible!
Song List

8          Liza Medley: Take Me Along (Merrill);
Tea for Two (Youmans/Caesar); They
Can’t Take That Away from Me
(Gershwin/Gershwin);  My Mammy
(Donaldson/Young/Lewis)

Nancy Hays starred in the title role of MAME backed by a 26-piece orchestra at Music Theater Works where she also played the leading roles of Hedy in HOW TO SUCCEED IN BUSINESS, and Ruth in PIRATES OF PENZANCE. Other theatrical credits include M’Lynn/ STEEL MAGNOLIAS, Rose/GYPSY, and Amanda/ THE GLASS MENAGERIE. Nancy returned to theatre in 2015 to portray Judy Garland in THE BOY FROM OZ, presented by Pride Films & Plays, after performing for years as an opening act for Tommy Tune, Rita Rudner, Glen Campbell, Ronnie Milsap, George Burns, Conway Twitty and others. Her country song COME DANCE WITH ME is an international hit and one of the most popular line dance recordings of all time. Nancy has made numerous TV appearances (including one on ABC dancing with Mario Lopez), produced dance instruction videos, recorded five albums and toured the UK multiple times. She is a proud wife and mother to four young adults featured on her latest recordings and videos. www.nancyhays.com

Alexa Castelvecchi most recently starred in  Chicago-based company, Hell in a Handbag’s FACTS OF LIFE parody musical called SATAN’S SCHOOL FOR GIRLS where she played the sitcom's favorite tomboy, Jo. Alexa got her start playing Liza Minnelli in RIP NELSON HOLIDAY SPECTACULAR with Hell in a Handbag, which led her to her current role in ONCE IN A LIFETIME. She has also been featured in multiple short film projects including BI-NOW, EON UPPERCUT, THE AUDIT and THE NEST, which have had success in festivals. As the proud owner of her baby grand piano, music and performance are the heart and soul of Alexa with a side of laughter. www.alexacastelvecchi.com
​

Robert Ollis ​(Music Director / Arranger /Pianist) served as music director for THE BOY FROM OZ, an acclaimed Chicago premiere by Pride Films & Plays (PFP), as well as helping to create the follow-up production of JUDY & LIZA: THE  LONDON PALLADIUM CONCERT - A TRIBUTE.  He has served as Music Director of such popular PFP shows as A MAN OF NO IMPORTANCE, SOUTHERN COMFORT, YANK!-A WWII LOVE STORY, PRISCILLA: QUEEN OF THE DESERT, THE NANCE, SONGS FROM AN UNMADE BED, A HISTORY OF SUMMER, THE BOOK OF MERMAN and UNDER A RAINBOW FLAG. He served as Music Director for Underscore Theatre’s hit show HAYMARKET: A NEW FOLK MUSICAL. Robert received a Jeff Award for music direction of KISS OF THE SPIDER WOMAN, plus Jeff nominations for six other shows. Robert has also served as Music Director for notable productions at Bailiwick Chicago and Bailiwick Repertory Theatre. He has music-directed THE ADDAMS FAMILY and several other productions of the Casting Auction Players, as well as countless theatre-benefit concerts. Robert has accompanied performers Donna McKechnie, Capathia Jenkins, Andrea Marcovicci, Nick Adams, and Nancy Hays at cabaret and concert venues in New York City and Chicago. www.robert-ollis.com

PLEASE FILL OUT OUR SURVEY!